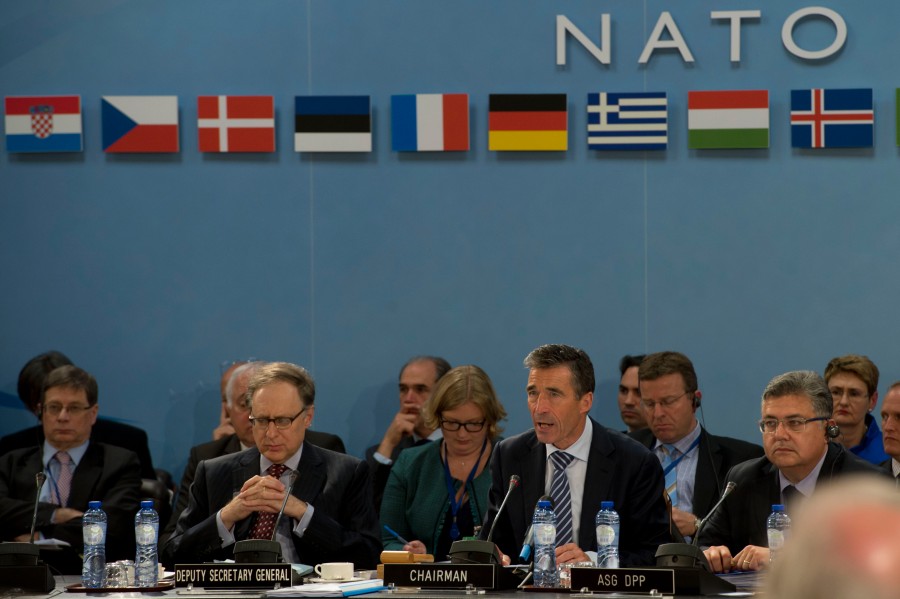 A leaked US diplomatic cable details the inner workings of how the aspiring NATO Secretary General Anders Fogh Rasmussen, the former Prime Minister of Denmark, negotiated to secure his eventually successful confirmation to that post, with the Danish government pledging to close a Denmark-based Kurdish satellite TV station so as to appease Turkish officials and thereby gain Turkey’s approval of his NATO nomination. While searching for a legal pretense to close the Kurdish TV station, which was banned in Turkey but available via satellite, Danish prosecutors requested leads from US intelligence.

One of the most striking cables from the release was written by then-Deputy Chief of Mission at the US Embassy in Copenhagen, Terence McCulley, and sent to the CIA, the NATO-European Union Cooperative, the US National Security Council, the US Secretary of State, and the US Embassy in Ankara, Turkey, on May 26, 2009.

In the week leading up to the 2009 Strasbourg-Kehl NATO Summit on April 3-4, where the next NATO Secretary General was set to be chosen, Deutsche Welle reported that Turkey was opposed to Rasmussen’s ascension to that post, with the issue of Kurdish station Roj TV as one of two main points of contention.

“The mouthpiece of the terrorist organization in my country is broadcasting from Denmark. How can someone who did not stop this safeguard peace?” Turkey’s then-Prime Minister and now-President Recep Tayyip Erdogan said on the first day of the Strasbourg summit, according to The Guardian. Prospective NATO Secretary Generals must win the approval of each member state.

Towards the end of the summit the issue was heightened to the point that it nearly derailed the meeting’s celebratory mood, coinciding with NATO’s 60th anniversary. Negotiations over acceptance of Rasmussen had to be extended at the last minute by two hours with major concessions granted to Turkey (including a promise that it could join the European Defense Agency) before it finally relented and gave its support for him.

According to the leaked diplomatic cable, “among the measures offered Turkey for not blocking former PM Rasmussen’s appointment as NATO secretary general,” were, “Danish pledges to intensify efforts against Roj-TV.”

According to a Deutsche Welle report in 2008, Roj TV, whose parent company was Mesopotamia Broadcast, had a potential audience of tens of millions of Kurdish viewers globally.

“The station broadcasts in the two main Kurdish languages, as well as in Arabic and Turkish. ROJ TV produces a variety of programs. The multilingual newsroom buzzes with journalists and producers and doubles as the backdrop for news bulletins.”

However the content of Roj TV’s programming was not without controversy. As Deutsche Welle reported, a former producer who made a documentary about daily life in PKK guerrilla training camps, Sores Topak, admitted his work could be seen as propaganda. However he defended it as legitimate on the grounds that it was also what his Kurdish audience was interested in, saying he additionally didn’t present one-sided coverage of the PKK. Former Roj TV editor Belfin Hezil added that Kurds have a right to have their own media.

Guy Degen, the author of the 2008 Deutsche Welle report concluded, “For now, whether ROJ TV is an instrument of propaganda for the PKK or a television channel trying to give a voice to the Kurdish people will largely remain in the eye of viewers – be it governments wary of terrorism and breakaway regions or an ethnic minority wishing to keep in touch with their home, culture and language.”

Turkey was firmly in the camp of “governments wary of terrorism and breakaway regions.” Roj TV was banned in Turkey throughout its existence. As early as 2005 Turkish authorities had requested Denmark to close the satellite TV station, arguing it incited hatred, glorified PKK guerrilla fighters, and violated human rights laws. In 2006 and 2007 they made official complaints to the Danish Radio and Television Committee, arguing that Roj TV supported the PKK, which is classified by the EU as a terrorist organization.

However those complaints were not substantiated. Yves Bot, the Advocate General at the European Court of Justice, summarized the Danish Radio and Television Committee’s findings saying, “the features included in the Roj TV broadcasts subject to complaint did not contain any incitement to hatred on grounds of race, nationality or religion,” rather, “they communicated information, news and opinions as part of news and discussion programmes.”

In 2008 Germany banned the station, with prosecutors arguing it was, “a propaganda mouthpiece for the Kurdistan Worker’s Party (PKK),” according to the 2008 Deutsche Welle report. However an EU Court later clarified that even though it did find that Roj TV incited hatred according to Germany’s legal standards, because Roj TV was based in Denmark, if it crossed any legal lines to merit its banning it was up to Denmark, its home country, to determine such. Furthermore the court ruled that Germany could not prevent its transmission into Germany from Denmark.

By the time of the 2009 NATO summit in Strasbourg it was clear that the key to getting Roj TV shut down lay with Denmark.

“Avoid the Appearance of a Quid Pro Quo”

“Danish pledges to intensify efforts against Roj-TV – among the measures offered Turkey for not blocking former PM Rasmussen’s appointment as NATO secretary general – have given additional impetus to the investigation while also prompting senior officials to tread carefully, to avoid the appearance of a quid pro quo (i.e., sacrificing freedom of speech in exchange for a high-level post).”

In writing his diplomatic cable, Deputy Chief of Mission McCulley demonstrates his talent for blunt summary. He goes on to say that Danish officials need something that will, “shield them against charges of trading principle for the former prime minister’s career.”

McCulley details that the chief prosecutor for Denmark’s case against Roj TV, Lise-Lotte Nilas, and the legal advisor for the Danish Security and Intelligence Service (PET), Lykke Sorensen, had briefed him on the current status of the investigation against Roj TV, “highlighting the case’s long history and ongoing challenges.”

After reflecting that, “no clear evidence has been found to connect the broadcaster with the PKK,” and that, “new, ‘smoking-gun’ information on Roj-TV’s PKK connections was unlikely,” McCulley informs the recipients of his report, including the CIA, that the Danes – Nilas and Sorensen – would be grateful as always, “for any U.S. intelligence that could help the prosecution.”

In summary McCulley says, “Danish officials are committed to reinvigorated efforts to close the station, to renewed trilateral cooperation with us and the Turks, but in strict accordance with Danish law.”

Charged Under Anti-Terrorism Provisions and Bankrupted

Danish prosecutors and investigators continued to pursue Roj TV for over a year after McCulley sent his report and were ultimately successful in securing enough evidence to bring charges. In September of 2010 Roj TV and its parent company Mesopotamia Broadcast were charged under anti-terrorism legislation in the Danish Penal Code for promoting the PKK.

In January of 2012 Roj TV was convicted of promoting a terrorist organization and fined 2.6 million Danish crowns by the Copenhagen City Court. The court also found that Roj TV was financed and under the control of the PKK. Roj TV appealed to the High Court of Eastern Denmark. Not only did it lose, but its fine increased to five million Danish crowns and its license to broadcast was revoked.

In March of 2013 Roj TV declared bankruptcy and in February of 2014 the majority of the Danish Supreme Court upheld its conviction. In May of 2018 the European Court of Human Rights issued the final decision in the case, upholding Roj TV’s conviction.